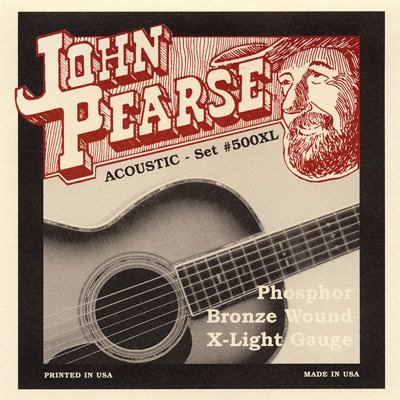 In stock and ready to ship or pick up as early as today!

"English studio musician John Pearse first began researching into music string manufacture in the mid-sixties. The first person, ever, to teach guitar on television - his BBC lessons have been seen in six countries while his PBS series, STRINGALONG, was shown in most US television markets whilst becoming perhaps the best selling video guitar course both nationally and internationally. He is the author of some forty books on such diverse subjects as instrument building and technique- to cooking and the traditional art of fly fishing! In 1965 John began his collaboration with British Music Strings, a London string maker, to develop a guitar string with both a longer life and a more accurate vibrating and nodal pattern. His designs were so successful that, over the years, both British Music Strings and Thomastik marketed strings under his name. John also designed string lines for Bourne Guitars and Jay Associates, makers of the Jester guitar line.

In 1978 he came to the United States to develop a unique line of accessories for the C.F.Martin Company. It was here that he again met dulcimist Mary Faith Rhoads. After eighteen months, he decided to leave Martin, and, with Mary Faith, started Breezy Ridge Instruments to produce the Breezy Ridge Hammer Dulcimer. His revolutionary design proved itself to be the best sounding Hammer Dulcimer ever made. Next came a line of music strings designed especially for the professional musician. Within months, word of these exciting strings had spread across the country and pressure from both the public and beleaguered dealers had persuaded John and Mary Faith to make their line available to stores and things have just kept growing since then!"

About Us!
Your place for music lessons and supplies in Middletown. Middlesex Music Academy is a non-corporate locally owned business. As a member of the Middlesex Chamber of Commerce we strive to support local businesses and build the community as a whole.