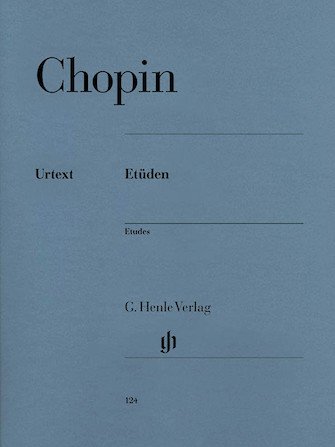 In stock and ready to ship or pick up as early as today!
Chopin succeeded in doing something truly remarkable with his two cycles of Etudes op. 10 and op. 25, published in 1833 and 1837 respectively. Probably no one before him had composed technical practice pieces that at the same time reached such musical heights. Chopin's Etudes are character pieces that are full of tension, written for the concert hall. The virtuosic works, including long-running hits such as the “Revolutionary Etude” op. 10 no. 12 belong to the pianist's core repertoire. In addition to the two cycles op. 10 and op. 25, our Urtext edition also contains three Etudes without opus number, which Chopin composed for a Parisian piano method in 1840: wonderfully lyrical miniatures, which can hold their own with the 24 grand studies.

About Us!
Your place for music lessons and supplies in Middletown. Middlesex Music Academy is a non-corporate locally own business. As a member of the Middlesex Chamber of Commerce we strive to support local businesses and build the community as a whole.